We live during a time in which most Americans spend 90% of their time indoors, people recognize more names of corporate brands than of plants, and parents fear what kind of world their children will inherit. When we let ourselves feel the extent of the global issues at hand, we often feel so overwhelmed and powerless that we turn toward distraction, become numb, or succumb to despair. Clearly, we need help in navigating these turbulent waters.

Perhaps the field of psychology can help. There is a new leaf unfurling on the tree of psychology. It receives its nourishment from deep roots, those of indigenous wisdom traditions. And yet, it is also informed by the winds of change, those of modernity. This new leaf is referred to as ecopsychology and it aims to address individual and collective suffering as well as its cultural sources, such as the impact of technology, urbanization, and the myth of the rugged individual.

Psychology as a field has spent a vast amount of time studying dysfunctions, but much less time investigating love, especially when it comes to the love of nature. The term biophilia refers to human’s innate love of the natural world. Evolutionary biologist Edward Wilson who coined the term, believes that our need for time in nature is genetic. After all, the industrial revolution marks only a small percentage of our human existence, and our nervous systems have grown in concert with other life forms for hundreds of thousands of years. Ecopsychology aims to resurrect this inborn love of the natural world. Can we really afford to continue without retrieving this aspect of our humanity?

One way of naming the increasing loss of connection to the earth is Nature Deficit Disorder. Although the American Psychological Association does not recognize this as a legitimate diagnosis, it has hit a deep cord for many people. Richard Louv, who wrote Last Child in the Woods has brought national attention to the issue, spurring on the movement, No Child Left Inside!

Research is beginning to support the idea that time in nature can have a positive impact on symptoms such as Attention Deficit Disorder, but this has not always been so. Louv recalls reading an article in San Francisco magazine that recounts the plight of a couple in the early 1900’s whose son was kicked out of school for being too hyperactive. Desperate to find a solution, they began to pay more attention to the ways in which nature captivated and soothed their child. They decided to spend more time with him in wild landscapes ranging from rivers to sand dunes. The rest is history…that boy was Ansel Adams.

Ansel Adam’s parents trusted what some ecopsychologists are now calling Nature Therapy. Other emerging modalities that have proven to be effective, according to Dr. Craig Chalquist, include Animal Assisted Therapy which has helped children to become more cooperative and Alzheimer’s patients to feel less agitated, and Horticulture Therapy which has improved the lives of people suffering from substance abuse, stress, service provider burnout, and some forms of trauma.

The aim of ecopsychology however, goes beyond seeking only to discover what therapeutic benefits we can receive. For this inadvertently reinforces the belief that we are separate from the rest of nature. Without realizing it, we find ourselves caught in the cultural trance of consumerism, forgetting that within us exists what Carl Jung referred to as, a “two million year old self” filled with ancient wisdom.

So how else might we approach nature and healing? If we look to the indigenous roots from which ecopsychology is sourced, we are reminded of a world in which everything is alive, has consciousness, and is in conversation. From this place, we leave the realm of cause and effect and enter a place where the ordinary and mysterious touch, a place in which we deeply belong, a place where we rediscover the language before words, a place where we are reminded of who we truly are. As we open to this, we retrieve the wisdom in our bones, and our capacity to imagine into a different future.

Themes I Write About 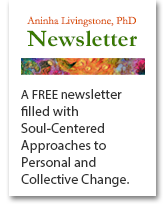